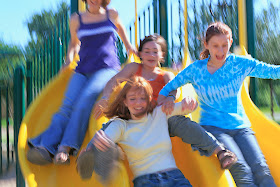 (courtesy of Microsoft Clipart)
Here is a post that's a bit different than what I would usually post. It's a bit more serious. It's a guest article by Jeremy from onlinephdprograms.com. Jeremy put together an article concerning the pros and cons of social interaction in preschool environments.

At first read, I wasn't sure if this was something I agreed with. How can social interaction be a bad thing? Then I thought well everything in life has it's pros and cons. Personally I can't believe that social interaction in preschool is detrimental. I truly believe it is a good thing. After reading the article, maybe you can send me your thoughts?

Preschool is widely held to be an essential part of the developmental process. Parents seek out the best preschools in their region, sometimes registering their child for classes before they are ever even born in order to ensure a spot at the “right” school. However, much as preschool is bandied about by parents as being essential to giving children the proper social and academic growth they will need to succeed down the road, the professional views of preschool’s capacity to create meaningful social development in young children is hotly debated, with child psychologists and as well as those who have attended Ph.D. programs in areas like early childhood education offering multiple theories about how preschool benefits a child’s social development. From views that preschool can actually damage a child’s social development to beliefs that preschool is an essential element in teaching children how to interact with others, the views listed below offer an insight into the complex world of the study of childhood social development and the role that preschool plays in its progress.

According to an article on the site ParentingScience.com, preschool can actually create problems. This isn’t to say that preschool isn’t an important part of a child’s social development, but that parents must take an active role in that development to assure that their children develop social skills that are appropriate for their future roles as upstanding members of society.

Among the skills that children develop during their preschool years, ParentingScience.com cites empathy, emotional self-control and communication as being the core skills that children develop during this stage of life. However, unlike other studies which view preschool as a time in which children learn to interact socially with their peers, ParentingScience.com’s article, which relies upon numerous academic resources, cites preschool as a time in which a child’s behavior can actually become problematic. This is because children learn to model social skills based upon their interactions with others. While preschool provides plenty of time for children to interact with peers, it doesn’t follow that the behaviors they will model from these interactions will be positive.

To offset the negative potential that preschool may have on a child’s social development, ParentingScience.com cites the necessity of strong parent-child bonding during these formative years. That is because, the site argues, parents are best equipped to teach their children about emotions, appreciate long-term consequences of behavior, model empathy, and demonstrate appropriate self-control and problem-solving skills. When tailored to the child’s developmental level and pared with close parent-child interaction, including talking about the world around the child and supporting a child when he or she exhibits negative emotions, the parent can teach the child how to interact with others in a caring respectful manner. In doing so, the parent helps to counter the negative impact which other children’s behavior might bring and gives the child the skills he or she needs to interact successfully in preschool.

In her Ph.D. dissertation for Auburn University, Dr. Mina Kim studied 365 children ages 36 to 60 months in the preschool setting. Her interest in the study was in understanding how children interact during this developmental period, and to this end, she studied the 1784 dyads, or relationships between two children, which were generated over the course of the study. She identified four distinct observations based upon the dyadic interactions:

• Older children were more likely to engage in conflict, but that conflict was less intense that the conflict observed in younger children. Harmonious interaction was also more frequent amongst older children.
• Girl dyads were more harmonious than boy dyads, and boy dyads tended to engage in more intense conflict.
• Established friendships (those noted by at least two preschool teachers) demonstrated greater harmony and greater conflict than those friendships which were only noted by one teacher.
• When one child was dominant in the dyad, more frequent conflicts occurred than when the children were equals.

What Dr. Kim’s study found, in part, was that “social competence was connected to frequency of harmony but also to intensity of conflict.” Thus, as a child develops social skills during their preschool interactions, their ability to interact harmoniously and resolve conflict increases. Older children demonstrate greater social competence than younger children, as could be expected, and boys and girls demonstrate an early understanding of gender roles. However, the role of the parent in developing social competence is not discussed in Dr. Kim’s dissertation, nor should its importance be discounted.

The Importance of Classroom Interaction

The Center on Social and Emotional Foundations for Early Learning discusses how classroom interactions can enhance social development among preschoolers in their short brief “Using Environmental Strategies to Promote Positive Social Interactions.” They maintain that meaningful social development can occur amongst preschools peers when the children are not only given the opportunity to interact, but when their interaction is facilitated.

Among their recommendations is that the preschool classroom should feature learning centers that change in composition frequently, new toys that are introduced on a regular basis to encourage interactions that might not otherwise occur, and to keep children near peers who have already demonstrated social competence. In this way, children interact with others, learn principles like sharing, and model the positive behaviors of those who have already developed essential social skills.

The theories studying how children develop social skills during the preschool years are myriad. Many look at the role of the preschool itself. Others examine peer interaction and still others look at the role of the parent in teaching social skills. What each agrees upon is that no child develops social skills in a vacuum. Rather, it is a complex process that requires the interaction of multiple individuals to reinforce proper social behavior. When reading up on childhood social development, it is important to remember that parents, educators and peers all play roles in a child’s development and none of them can substitute for the absence of another.
Preschool Playbook at 2:21 PM 13 comments:

How Big They Grew!

This short post goes out to all the little ones is my class last year. I just wanted to share with all of you how big the zinnias that we planted for Mother's Day got. I hope your flowers are doing just as well. 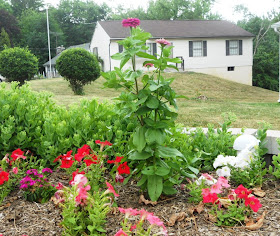 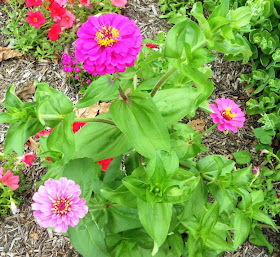 I hope you are having a great time with your family during this fun summer time!
Preschool Playbook at 1:24 PM 5 comments: 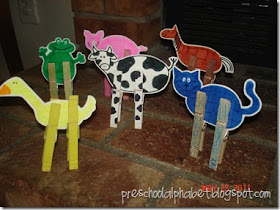 A while back a Lindsy wrote me with a wonderful idea and I told her I would share it. Well, I'm finally getting around to that. Sorry it took so long.

Lindsy, from Preschool Alphabet, sent me an idea to make some farm animals that your children can actually play with. Hers turned out so cute. I also thought it was great that this is something your children can have some fun with.

The first step is to decide which type of farm animals you would like to make. Now here is the tricky part. Draw the animal on a piece of paper. I drew a cat--No critics! As you can see, drawing is not my strong point. There are probably places on the Internet to find animals and print them out.

After you have your drawing it's time to paint or color it. I used marker, but paint will work just as well. When they are ready, cut them out. After Lindsy made her animals, she laminated them so that they would last longer. If you don't have access to a laminating machine, you could always use contact paper which is available at many places: Wal Mart, Target, craft stores, etc.

I also thought if you are unable to do that, you could glue your animal to a piece of cardboard backing, like from a cereal box or gift box. That way it is a bit stronger.

The next step is to get two clip clothespins per animal. Paint the clothespins the same color as the animals. When they are ready clip them to the animal. 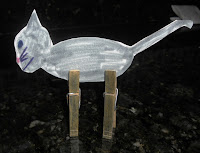 These little animals can give you children hours of fun. Check out all the ideas Lindsy had that could add more depth to these great animals.