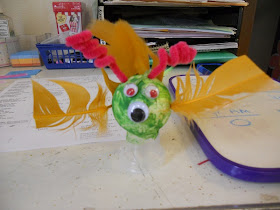 Hi everyone. I hope you all have been doing well and enjoying your time with your children.  Our school days are flying by and we are almost done.

I was excited this past week we had some new experiences I wanted to share with you.  Last week, we had a fun space week.  Mrs. D put it together and the kids had a great time.  We talked about the planets, the sun, the moon, astronauts, and even aliens.  The kids loves the aliens the best.

Our first craft was a moon picture with some fun aliens.  The children got a black piece of paper,  they painted a moon on the paper with puffy paint.  We made the puffy paint with 1/4 cup glue, 3/4 cup shaving cream, and some white paint.

After the moons dried we added some cute aliens, drawn by Mrs. D and colored by the children.  The pictures were great. 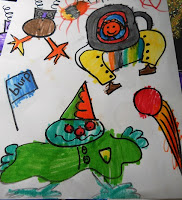 The second day was alien/astronaut day.  The children came to school dressed as either an alien or astronaut and we had fun with this all day.  Mrs. D had bought everyone a glow stick.  Then we pushed some tables together, threw the parachute over it--to darken the area--then we blasted off to space, they thought it was great.

We painted a styrofoam ball that day to which was the beginning of an alien we would finish on Friday.

Our experiment that day was to string a string across the room with a straw on it.  Then we blew up a balloon, attached it to the string and blasted it off across the room.

For Friday, we finished out alien with lots of goodies--eyes, pipe cleaners, feathers, etc.  They turned out so cute. 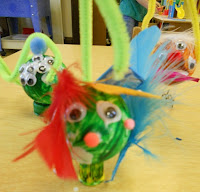 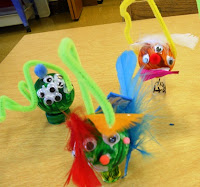 The best part of the day though was the experiments.  The kids LOVED them.  First we took a bottle of diet soda and added four pack of Alka Seltzer to watch the blast off of soda.  The best one though was shooting off our rocket.  Mrs. D's husband had made rocket out of a soda bottle, and some balsa wood.  He then made a a fuselage for us to add "rocket fuel."  We put vinegar in the soda bottle, we filled a little more than about 1/4 of the bottle.  Then we filled the fuselage 1/2 way with baking soda.  We carefully put the fuselage into the rocket and waited for the two substances to mix.  My first try, I wasn't quick enough and the rocket shot sideways while I was talking to the kids.  When we tried it a second time I was quicker and we shot it in the air.  I wish we had someone recording it, it was great!

Take care and I was so happy I had some new fun to share with you.
Preschool Playbook at 10:47 PM