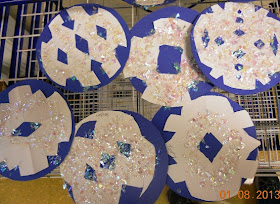 I wanted to do a new project with my three's, so I thought I would do a snowflake print.  I had actually seen this in The Mailbox magazine and they made it look so easy.

The idea was to cut out some snowflakes from tag board  tape them to a piece of construction paper, then paint over them with white paper.  Then remove the snowflake patterns.  My first three paintings went okay, then problems ensued.  The snowflakes got way too damp and then the tape would no longer stick to the snowflake, or the paper.  I tried different kinds of tape and even tacky--no luck.

So I decided I would cut the snowflake pattern out of foam and stick that to the paper.  Here the problem was the foam was too thick and the paint made the snowflake would flip, or the paint just seeped in too thickly. 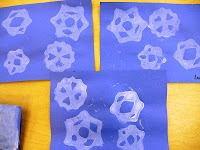 Finally--when I only had about 5 paintings left to do, I came up with a brainstorm.  I continued to use my foam shapes, but what I did was to paint the foam shapes.  Then I had the children press them on their paper.  I think they came out much better.

The Pre-K class also did snowflakes.  Last year was my first experience with giving the children a folded piece of paper and letting them cut it.  It didn't go too well for me, so I was a bit apprehensive   about the project this year.  Thankfully Mrs. D was there this year.  She had the children use a small circle instead of a large square like I used last year.  This went much better. 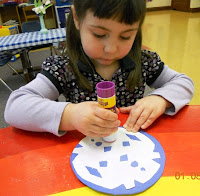 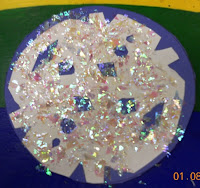 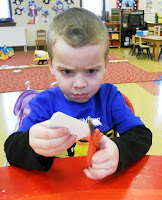 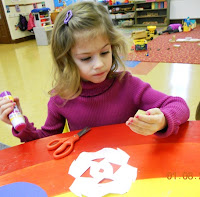 After the  children cut out their pieces, they glued the snowflake to a piece of blue paper and put some "snow" glitter on them.  They look beautiful hanging on the wall.
Preschool Playbook at 10:12 PM 9 comments:

It's That Time of Year Again 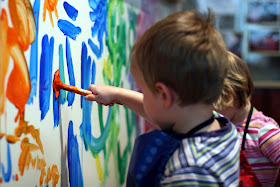 I just wanted to give a quick reminder to any parents of children that may be starting preschool soon.  It is actually almost time to start registering children for the 2013/2014 school year.  I know, isn't that amazing?  2013 just started and it's already time to think of the upcoming school  year?

This month we have been busy with school visits, telephone calls, and emails.  If  you are thinking about sending your child to school in September, now is the time for action.

Good luck and have fun!
Preschool Playbook at 5:00 PM 4 comments: 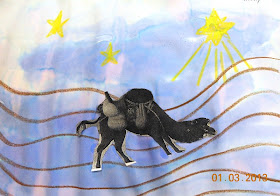 This year Mrs. D was interested in doing a small craft to recognize Three Kings Day.  During the month of December we had talked about Christmas, Jesus' birth, Mary, Joseph, the shepherds, and of course, the kings.

To recognize this day we did a very simple craft, but it was cute--aren't they all.  We had gotten a book from the library, but I can't remember it's name.  The book was a story of the birth of Jesus.  It took each part and gave an explanation of what was happening, but not too detailed that we lost the children.

For the kings, it gave their names, what they brought, how they traveled following the star, and their camels.

Mrs. D decided we would do a crayon resist picture.  A "desert" scene was drawn on a piece of white paper with crayon--an extremely simple drawing, some sand and then stars were added.  One star was larger than the rest to symbolize the star they followed. 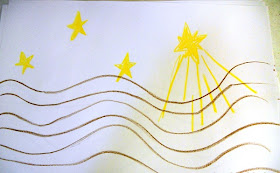 The children then water colored over the crayon.  We used a darker blue instead of the black.  After they watercolor was dry the children added a camel.

This craft could have been more involved if one would like, but time didn't permit us lots of fancy options.  The children thought it was great that you could still see the crayon even though they painted over it.
Preschool Playbook at 7:38 PM 2 comments:

Starting Off a Happy New Year

We got back to school this week.  I hope everyone had a wonderful holiday and happy new year.  We started school on Wednesday and decided to kick it off with a talk of new year's; US and Chinese. 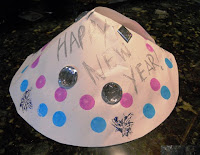 Anyway, to make the hat each child got a large circle.  We then put out all kinds of fun stuff for them to decorate the hat.  There were foam pieces, sequins, markers, buttons, etc, anything that would decorate. 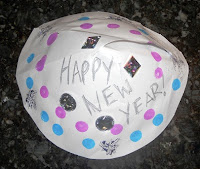 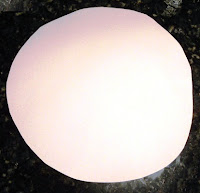 After the children decorated the hats, we cut a slit to the middle of the hat.  Then we folded it over to make a cone shaped hat.  They thought it was very cute.