A Day of Shadows 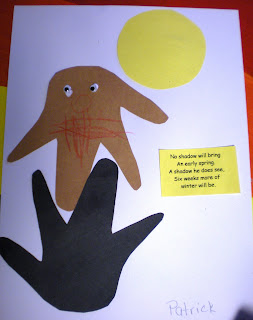 With Groundhog Day this past Tuesday, we had some great fun with shadows. I had all the children bring a flashlight to school with them. Who knew that giving children flashlights could raise the decibel level in the room by about 75%?
The children all brought their flashlights to opening. I had turned off the lights and made it as dark as possible--which isn't too dark in a room full of windows. Anyway, they shined their flashlights on the floor, ceiling, each other, and of course, in my eyes. Next, we talked about what day it was--Groundhog Day--and what happened. By school most of the children already knew good old Phil had already seen his shadow. I asked them what needed to be in the sky for Phil to see his shadow and they were right on the ball--the sun! 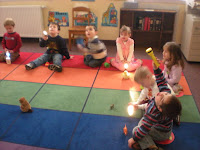 I then had lots of objects I brought from the room. Each child got an object and we tried to make it's shadow on the rug. We also saw that when the light got far away the shadow got big and when the light got real close, the shadow was very small. One fun observation for them was to see the shadow move as the light moved--even though the object didn't move. 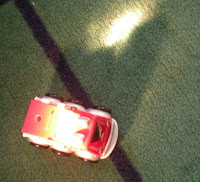 I then just let them play with their flashlights during playtime anyway they liked. The box house was a great place to take the light. Also, running with the light seemed extra fun--who knows? It was also amazing how we had lots of light swords in the room. We never had these before--just a few warnings:). 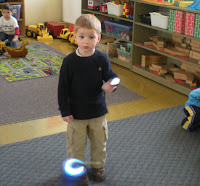 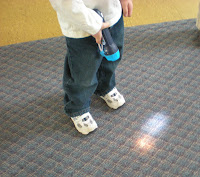 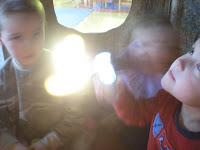 It it always just amazing to me how the addition of one small factor can change the whole dynamic of a class. It's fun to see what they can come up with.
Our craft was our handprint groundhog which I have made before. It has a brown handprint, a black handprint(shadow), and of course, a sun. (I am so proud of how great their name writing is coming along.) 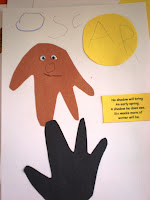 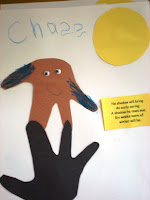 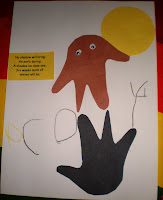 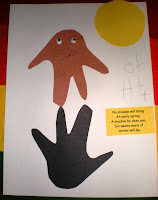 Here is the poem:
No shadow will bring
an early spring.
A shadow he does see,
Six weeks more of
winter will be.

Have a great six more weeks of winter.
Preschool Playbook at 1:05 PM